We have selected City Club for our mens belts range. A selection of dress belts and smart casual belts that will enhance your favourite pant or chino. Prices range from $49.95 to 69.95 with a total of 22 styles/colour options. No need to check out overpriced mens designer belts, see our City Club trouser range to show off your new City Club belt.

Genuine leather belts for men are the most sought after material for a mans belt long-lasting and with three essential base colours that do most of the work. They are a mens black leather belt, a mans brown belt and a mans tan belt. Choosing a plaited leather makes a great smart casual look. Also, the plaited belt qualifies as mens stretch belts which are comfortable to wear.

Dress belts are a belt that compliments a mans suit sometimes called a suit belt or to wear with a business trouser, however, may look out of place if used in a casual way with chinos for example. Within dress belts are with buckle, or alternatively with clasp which can look showier. A good value option is to buy a reversible belt, usually found as a dress belt its like buying two for one. 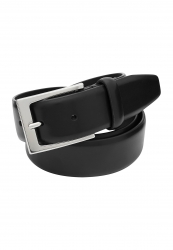 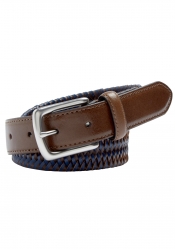 With a size range from 77cm to 152cm waist, we can fit all men with a belt. This is an opportunity for men who require plus size belts to select a colour range to match their trousers.

When selecting belts always choose the same size fitting as your trousers. The correct way for a belt to fit a waist is to take the distance between the middle hole of the belt and the butt of the buckle prong. This must match the bodies waist. As the holes are approx 3.5cm apart this allows for losing or gaining weight or perhaps just a big meal. The width of a belt can vary, but the most common is 3.5cm and 4cm. Most trouser loops accomadate up to 4.5cm width.